I gather he was a local distributor – also seeing the future as dim. There were 2 Tek-rebranded models: T, T; I have blurbs somewhere in an early catalog and.

I dumped the Tek creeatec eBay a couple years later, after obtaining the Createc, since passed to a friend. Still has it – never learned much about using a scope, though. We build lots of those, here. Later, I also peddled remaining Createc extras. Never heard the ‘explosion-proof’ claim, though. They did work, and for certain kinds of tasks – the DMM function with rudimentary ‘stats’, augmented by the display: I’d Really want to put some fast-diode over-volt protection in series via a Pomona box, though – if seriously using one of these for actual work.

I suspected at the time.

I’d consider them still quite useful teaching tools, given that they -like Tek- can be had for a fraction of original list. They’ve earned a spot in any electronics creaetc, I think. I used to know the name of the designer, etc. 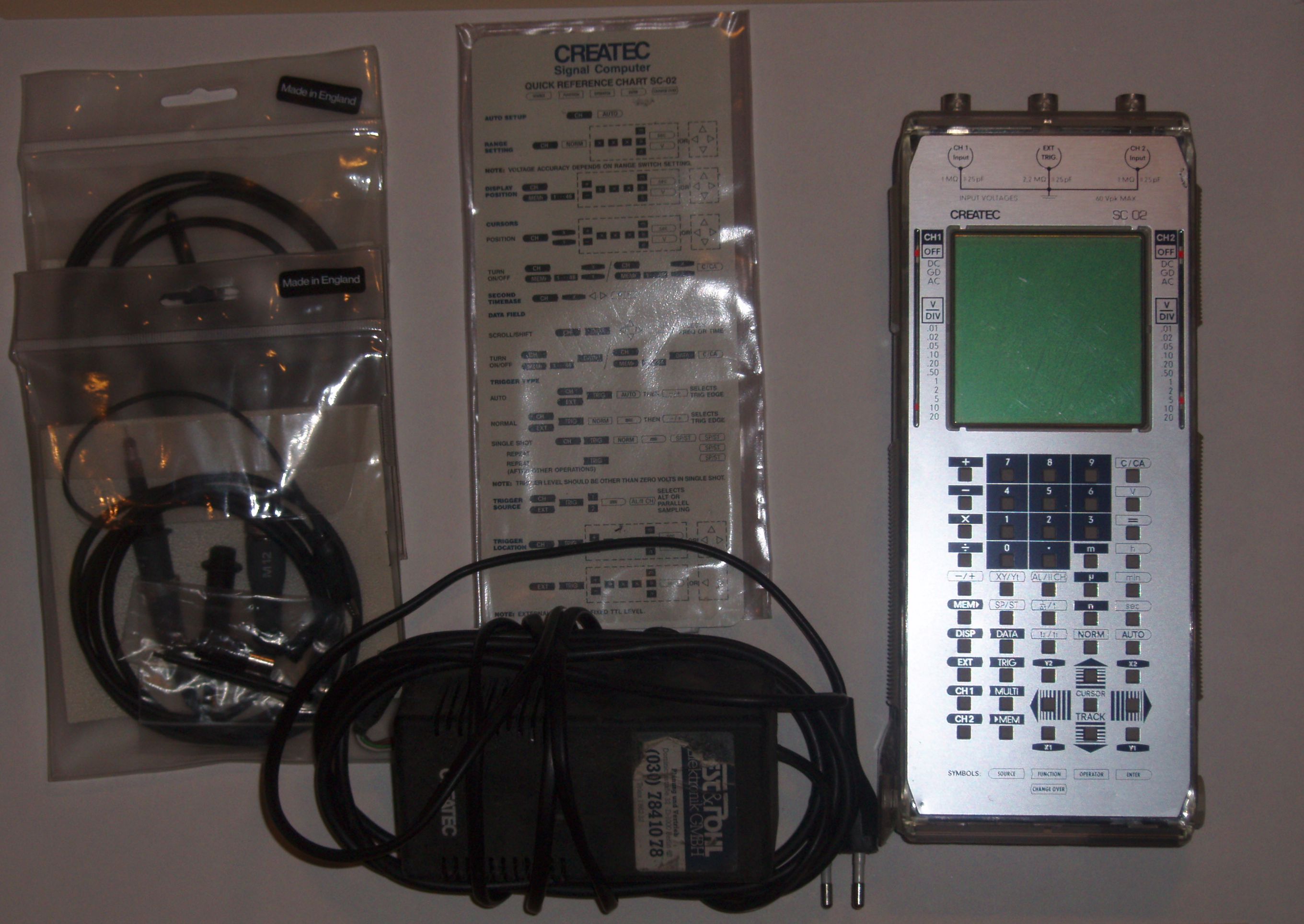 Ashton who also was intrigued, on sight. I just learned the most amazing thing! Remember the SC01 signal computer i was talking about some time ago? Just came across another one on ebay and guess what the auction said: I had no idea tek sold an identical model!

Looking on the web for the T it looks indeed just the same: My suspicion is it was designed by a company called Createc and only sold with Labels of the other manufacturers, but i don’t know for sure.

Here some auctions for you to look at, maybe it jolts someones memory: Now i have not yet done a proper search for Tek T too excited about the discovery ;-but i will do. I am also eager to hear anything at all about this thing, it seems very curious to me. The useage is so terribly complicated they can’t have sold many? But then it seems to have lotsa functions for the age. I do not even know the actual age, anyone?

Tek manuals for it would be fabulous please no commercial offers this is only for my enjoyment and has no budget. You are not alone – I bought a Tek version eons ago from a local electronic house, for a few hundred.

I have a createc and it’s damn tricky to use, you need to press something like “Ch1” “norm” “” “u” “seconds” just to change the timebase. That’s pretty much all i can do. I do have the quick instructions card and the large chart, but remembering them?

Additionally it will make a loud beep after each button, and if you make a mistake in the sequence which happens regularly it will sound a very loud triple beep that alerts everyone around to your incompetence to work it ;- What did the tek UI require you to do?

It seems to me the T and T probably were the createc sc and sc I don’t know what the difference is. I can’t see much, if any, difference in the case from the pics either, although there are definitely two versions one ex one plain.

I have seen two different keyboard styles, one with rubber buttons like a remote and one with a foil cover. Yes, the insides are are one-off. I was expecting it to be battery operated but no such thing. In mine the two internal memory batteries were dead. I’m not planning to use them for much work, but it is my best portable scope ;- I use x10 probes with it for safety.

Too bad, but i think you definitely confirm Createc made them and the others bought them. Know what happend to the company? One of the interesting things is the manual freely admits that the contrast of the LCD “is not quite ideal” or something liek that. But having both for a time, I chose to peddle the Tek. I acquired some Shendingen! DC-DC inverter samples, planning to derive whatever were the voltages – from a gel-cell, say. Lost interest in that project.

The Tek I bought had no battery box, just the heavy AC wall-wart supply. Maybe not, but am unsure; weren’t the advanced models given an extra ADC for dual trace, rather than time-share? I doubt that Tek sprung for that, since both their models were priced the same. As I recall, the main difference was in the logic of the panel layout. But I’m guessing at the source of my discontent – it just didn’t make enough of an impression to be stored in the little grey cells, now.

I may have the Tek catalog flogging both versions. You wouldn’t find that in a modern manual ;- ST No idea of the fate of the company. I don’t recall the annoying beeps particularly, but then I don’t make mistreaks Possibly, friend will pass on his pristine sample at some point – if so, will will mention it on Tekscopes.

And likely by now – his nicads would be flaky too — still, I’ve been surprised by some very old nicads remaining serviceable; Ex: I was thinking about making a battery too, some day. I have not looked into the power adaptor, it has no-tampering screws and i haven’t gotten around to defeat them yet. I was planning to use the scope to take away, craetec cord makes it a bit less useful for that. No the rubber button versions seem much the same, but the norma version or at least one of them uses a foil covered keyboard with no gaps into the device.

I will try to find a pic when i’m home. I’m slightly surprised this device was so expensive once. Some still fetch a good price on ebay, i found mine much cheaper with bad description. No idea of the fate of the company. Creatfc sure ;- About the LCD, no it’s not bad, i was s surprised the manual would say such a thing at all. You should check the nicads. Nearby are PCB stacking sockets with a zillion of pins, the corrosion gets in there too. On a list by David Digiacomo it says “manufactured by Dolch” which is the first and only time i heard that name in connection with the scopes in question.

The history of this thing is still a mystery to me. I got it without a power supply or any documentation. I later found two complete Createc Signal Computer SC with 2 power supplies and 2 battery packs both dead and 2 nifty rugged gig bags.

One of the Createcs works! I found a hard-copy tutorial for navigating the cryptic keystroke sequences. If they are dead the thing won’t start. ST toggle quoted message. On Mon, Jul 5, at I have a non-working T dissected in front of me right now. This cannot be undone.

The Group moderators are responsible for maintaining their community and can address these issues. Your email is included with the abuse report.

Search Only Within This Topic. You wouldn’t find that in a modern manual ;- ST. Are you sure you wish to 10 this message from the message 001 of TekScopes groups. Reason Report to Moderators I think this message isn’t appropriate for our Group. The new topic will begin with this message. Subject of the new topic: